Monday we had an enjoyable dinner in a trattoria located on Via degli Avignonesi, a narrow street off Via Boccaccio, another narrow street down the hill from Palazzo Barberini.  The food was great–salad of carciofi and puntarelle, pasta putanesca–and we engaged with a chatty Australian couple at the next table who were dining there for the third night in a row.  I spent the evening looking at a lighted sign hung high in the corner. It was an image of two cherubs holding bunches of grapes and floating (perhaps that is redundant–are cherubs always floating?) merrily over a wine glass while one–hold on, is he doing what I think he is doing?–pees into the glass.  That explains the name:  Pisciapiano Gioia Mia.  Piss Slowly, My Dear.  (Below is a picture of the image on the front window, not the sign, which did not photograph well with the iPhone.)

After ignoring the elevator and climbing five flights of stairs to our hotel room, which was after visiting five churches and walking from central Rome to San Giovanni in Laterano to Trastevere and back, Judy noted “We don’t go on vacation to relax.”

My view 16 hours after leaving Boston.  The dome of St. Peter’s Basilica framed and foreshadowed by lesser domes.

Newer coffee bars emulate Italy’s, where one downs an espresso in three sips while standing at the counter and then leaves.  In my 20 or so days in Italy over the past two years I saw not one person sitting at an espresso bar table working on a laptop.  The linked NY Times article reports that recently-opened coffee bars in NYC feature counters and chest-high tables, no chairs, to get away from what one cafe owner calls “the home office away from home.”  Every morning I meet friends at a local Starbucks.  It’s a typical Starbucks, with tables, chairs (hard-seat and upholstered), and regulars who use it as an office.  Two weeks ago it closed for renovations.  The initial plans did not include tables.  The baristas, who know our habits and needs, told the architect they could not get rid of the tables, no doubt picturing our confusion as we milled aimlessly about like dogs whose favorite sleeping pillows have been thrown out.  The tables were restored to the plans.

On our way to dinner in Cortona one evening the view through an open door arrested our progress.  On the wall inside hung beautifully elaborate wood-inlay pictures amidst stacks of picture-frame lumber and packing material, beyond which a cluttered narrow hall receded into darkness.  We stepped inside to find the artist chain-smoking and bent over a drafting table in an impossibly crowded workshop.  Unsure whether to disturb him we watched quietly for a few moments until he turned and invited us in with a warm smile.  He–Nanni Fumagalli, we learned from his card–spoke no English but Judy’s Italian was sufficient to learn that he had recently taken his pension to pursue his art full-time.  Each work is mapped out with draftman’s precision on a wooden backing to which he affixes razor-cut fine-wood veneer to produce trompe l’oeil images of, say, an open cupboard door that reveals scattered books and drafting instruments reminiscent of his shop, or an arch opening onto Cortona’s Piazza Republica. The pictures below are all we took from the experience; Fumagalli’s pieces cost €2,000 and up.

We are in the middle of 11 days in Italy.  After visiting Nate in Crema over the weekend we drove to Cortona, a walled Tuscan hill town. Etruscans settled Cortona thousands of years ago, and it has been inhabited and a hub of commercial and artistic life since then.  The streets are narrow, cobbled, and steep.  Very steep.

Viewed in the context of the anecdotal picture in my commencement address, the photograph of Nate sitting on a street corner in Crema, Italy is proof the furball doesn’t fall far from the . . . how best to end this sentence?  Perhaps “furball” is the wrong noun.  (Click links for full-size images)

doesn’t fall far from the

From my son Nathan’s recent blog post on Landmarks of Crema, the small Italian city where he has lived for most of the past two years.  Imagine the reaction if this mural–from the Italian high school where he teaches English–was painted in the hallway of a U.S. school: 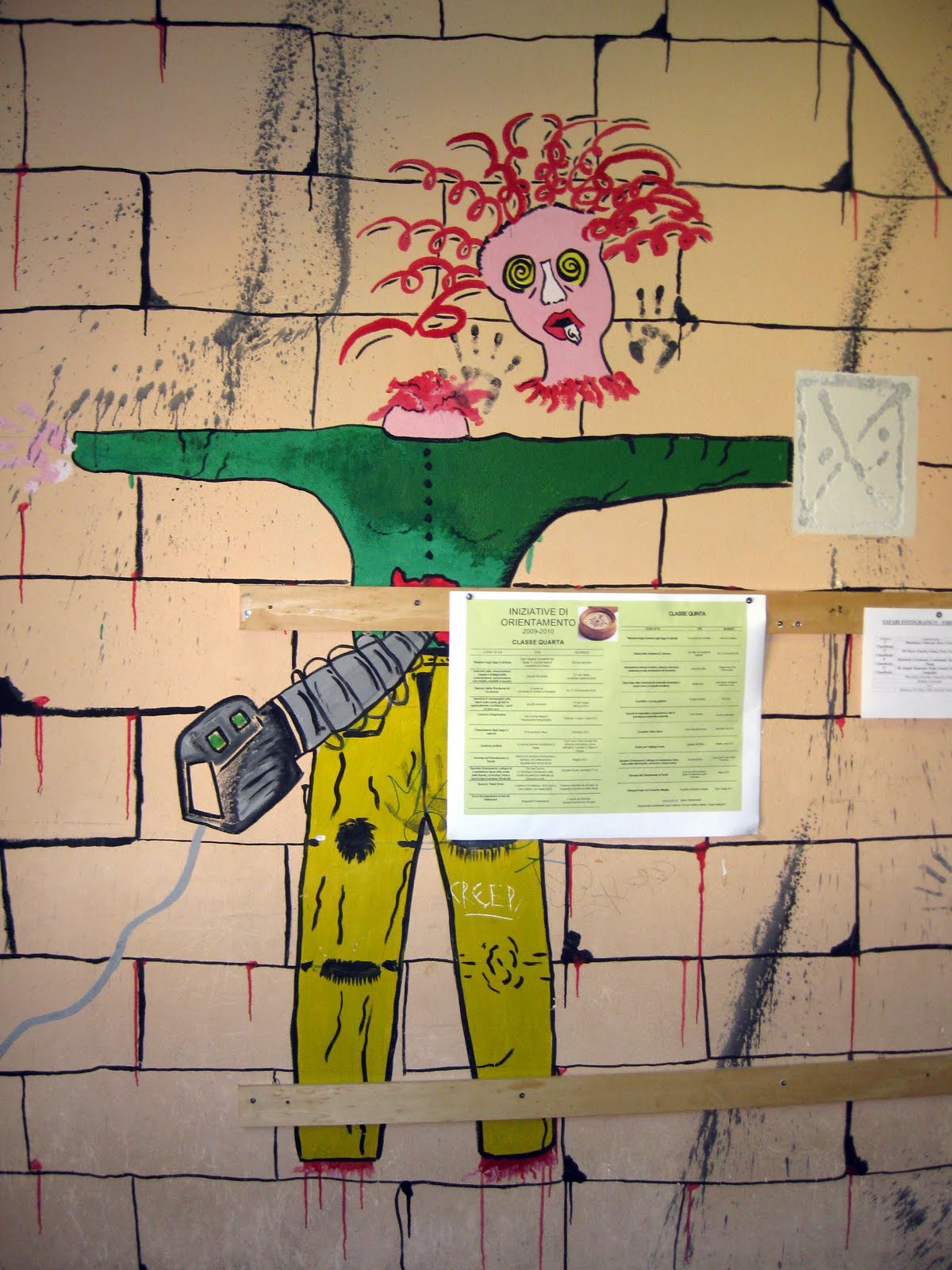 Or this (note the “warm, fuzzy, almost-correct inclusion of the popular English-language request for privacy”): 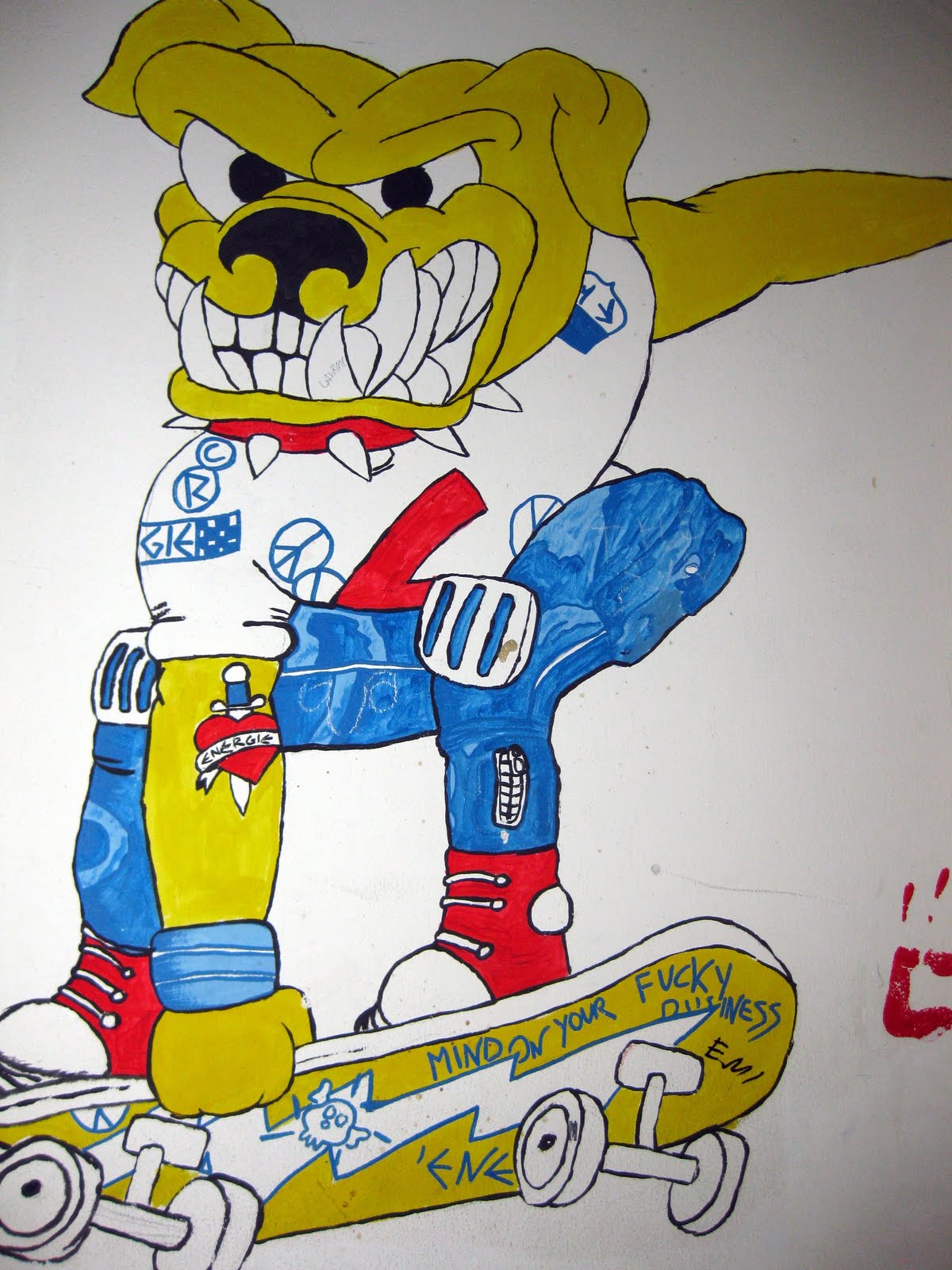 In another European case I’ve blogged about before (here, here, and here), yesterday an Italian court convicted three Google executives of criminal privacy violations in a case arising out of a 2006 YouTube video of the bullying of an autistic boy, posted to YouTube by his abusers.  The court imposed suspended three- to six-month sentences on three of the executives charged, acquitting them of defamation along with another executive facing only the defamation charge.  Google, which said it plans to appeal, called the result “astonishing.”  One of the convicted defendants–who is Google’s global privacy counsel–said “[t]he judge has decided I’m primarily responsible for the actions of some teenagers who uploaded a reprehensible video to Google video.” Google’s senior vice president and chief legal officer and its chief financial officer were also convicted.  The Wall Street Journal article stated “[t]he trial could help define whether the Internet in Italy is an open, self-regulating platform or if content must be better monitored for abusive material.”

U.S. law, specifically Section 230 of the Communications Decency Act, would shield Google from liability because the actionable video was created and posted online by a third party. To put it in the language of Section 230,  Google would not be liable because it was not the video’s information content provider; it was not “responsible, in whole or in part, for the creation or development of” the video.  U.S. law recognizes the impracticability–or impossibility–of screening tens of thousands of posts and other items created by Internet users.  This case, and the French case discussed in the prior post, show how far the Internet has come from that described in John Perry Barlow’s Declaration of the Independence of Cyberspace:

Governments of the Industrial World, you weary giants of flesh and steel, I come from Cyberspace, the new home of Mind . . .  You have no sovereignty where we gather . . . I declare the global social space we are building to be naturally independent of the tyrannies you seek to impose on us. You have no moral right to rule us nor do you possess any methods of enforcement we have true reason to fear.

Nate’s most recent post is must-read–and I speak only one language.  It will resonate with anyone who learned as an adult to speak a new language.