Sometimes I stumble into the right decision. I reluctantly cancelled today’s office hours and rescheduled tomorrow’s exam via this email to LA245 students:

I hate disrupting the schedule. However uncertainties created by Hurricane Sandy make it prudent to reschedule tomorrow’s exam and juggle the next few classes. A number of students are stranded in weekend travel destinations and the University has cancelled classes and urged that non-essential personnel limit travel to campus (ironic, isn’t it, that teachers are non-essential personnel?). Under these circumstances I am not going to hold office hours. I think the risk of storm-related injury is negligible but I could not live with myself if something happened while you were in transit. I considered answering questions via Skype or holding a Google Hangout but there is a significant chance that some of us–especially me–will lose power during the next day.

I just received an alert that the MBTA will suspend all transit service today at 2 pm–which means students who wanted to attend office hours would have had to walk, bike, or take a taxi. Had I not already cancelled this would have forced my hand.

Yesterday I completed the Best Buddies Challenge Century, a 100-mile ride from JFK Library on Columbia Point in Boston Harbor to Craigville Beach in Hyannis Port on Cape Cod. Rain was forecast, and the weather gods removed all suspense when rain started falling heavily at 6:15 am, 45 minutes before the official start time. I was riding with my friend Randy Carpenter and the Seaside Therapeutics team, most of whom bailed from the Century ride (one stated reason: “these conditions SUCK”)  and took the bus to the 50-mile start in Carver. Randy, his wife’s young Irish cousin Pauraig, and I stayed with the original plan and rode the entire route from Boston.

I’ve never biked so long and far in worse weather. It rained–steadily, spiked with torrents–for the first 55 miles and intermittently thereafter. We rode into the wind for the entire route save the stretch through Myles Standish State Park in Plymouth. At times the rain blew sideways, and as I came off the course the worst wind and rain of the day roared off the ocean, knocking down event tents, blowing down signs, drenching anyone not under cover, and creating havoc.

I outlasted the ride. I didn’t enjoy it. Riding wet is uncomfortable, but I reached an equilibrium in which I was as wet as I was going to be, I wasn’t cold, and the worst hassle was poor visibility from the rain on my glasses. Riding into the wind, on the other hand, sucks out one’s soul.  When you ride a lot you expect to move at a particular pace when you expend a particular amount of energy. A headwind mucks it all up. It’s like running in wet sand. You move, but not as far or fast as your body believes it should move. I respond by plowing ahead, grinding out the miles, keeping a rhythm–increasingly difficult as calf and thigh muscles turn against you–, and taking whatever progress I achieve. All of which is monotonous. Randy rode faster than me and Pauraig rode not as fast and I cycled alone most of the last 50 miles. I latched on to a few pace lines but they were problematic. Riding a pace line with strangers requires blind faith in their road sense. To avoid the rooster tail of spray from the front rider’s wheel you couldn’t ride directly behind,  often making the draft negligible. They were also just a bit too fast for my comfort. (For non-bikers, riding in a pace line involves drafting–riding in the vacuum–created by the rider directly in front. Riders in a pace line typically pull the line for a few miles, then drop to the rear of the line while the next rider pulls. Drafting saves enormous energy and allows a group of riders to travel much faster than any could travel alone.)

I was a lone cyclist, dotting the route a half-mile intervals with other lone cyclists, earning none of the benefits of riding in a group. The experience did yield an interesting lesson in relativity. Route signs announced when 20, 15, and 10 miles remained, and marked each of the final 5 miles. I’m good at estimating distances. I can eyeball a half-mile across a stretch of open land with respectable accuracy, and cycling a flat road I know the difference between 0.5, 1.0, and 1.5 miles. But not toward the end of yesterday’s ride. Those last five miles were nautical, or Jupiterian, or some unit of measure other than the statute miles I’ve known my whole life. Mile 96 was longer than mile 95, mile 97 longer than mile 96, mile 99 longest of all. When I mentioned this later Pauraig agreed with Irish lyricism: I know what a fookin mile is. Those were not fookin miles!

All for a good cause. The event raised over $4.5 million for Best Buddies.  Those aspects of the event under Best Buddies’ control showed thoughtful planning and professional execution. The State and local police kept us riding unimpeded through almost every intersection between Harbor Point and Craigville Beach. The five rest stops were awash with appreciative and helpful volunteers. The food was abundant and healthy. The post-ride shower ranks among my personal all-time top five. The Plain White T’s–a new band for me–were terrific, with tight musicianship, great harmonies, and catchy original tunes.  Tom Brady raised tens of thousands of dollars by throwing autographed footballs into the crowd at $1,000 a pop. (I deliberated raising my hand to receive a ball. While I weighed how cool it would be to catch a football thrown by Tom Brady against how I would explain to Judy that on top of everything else I spent $1,000 to catch a football thrown by Tom Brady, he ran out of footballs.) The logistics of delivering tired riders and bicycles back to the starting line at the end of the day were flawless.

Ride + one day the soreness is gone from my legs, my bike is clean and lubed, and I’m left with satisfaction for honoring my commitment to ride the Century, pride for completing  it in foul weather, and gratitude for the friends and family who supported me with their donations and encouragement. Would I do it again? Ask me in eleven months.

Finally, in early March, it feels (a bit) and looks (more) like winter–in Delaware, maybe.

We drove to Maine at 11 pm, leaving the wedding just after the cake was cut.  (The wedding ceremony was wonderful, the reception at Noche in the South End [closed to patrons for the night] was terrific.) Traffic was light, weather was wet, sky was dark, road was shiny-black.  We arrived at 1:30, to find Nate up to greet us. We unpacked in a drenching downpour, plugged in everything requiring charging, and I was asleep shortly after 2 am.  I woke at 6:45 to steady rain and calm air.  The lake was glassy, disturbed only by the pocks from raindrops, as I retrieved the boat in from the mooring and had my morning swim.  Most boats were already pulled from the lake. After coffee Nate drove the boat and I drove the truck and trailer to the Casco boat ramp.  The wind had picked up and the southern end of the lake was just starting to chop. We pulled the boat, bought a Globe at the Casco AG, and returned to the camp. Now our chores are done and we can wait out what will be nothing worse than a tropical storm by the time it reaches us.

And a hard wind’s gonna blow and a hard line has formed at CostCo for bottled water. It’s unclear how severe Hurricane Irene will be in our parts of New England.  Normally we would just hunker down for the storm’s duration at home or in Maine.  I want to pull the boat from the lake and secure dock and deck furniture so Maine is the obvious choice. Complicating the picture is that we are attending–and I am officiating at–a wedding tonight in Boston.  Wind strength is projected to start to increase in Boston tomorrow between 7-8 am and in Maine around noon.  One plan is to rise tomorrow at the crack and drive to Maine.  The other plan, currently favored, is to drive to Maine tonight after the wedding.  I’m the designated driver. We’ll see what we do.

Current Waban temperature:  98 degrees. There’s not much difference today between being inside and outside the Bikram Yoga studio.

The part of me that thrills at fireworks, howitzers firing during the 1812 overture, and watching summer thunderstorms from the screen porch* has always yearned to witness a tornado–until photos and videos of their unpredictable violence bring me as close as I truly want.  I went to Maine mid-day and was oblivious until this morning of yesterday’s tornadoes and violent thunderstorms in Massachusetts.  This photo stays with me, capturing the tornado’s casual, indifferent power in the incongruity of the squashed red car lying on its side against a tree. 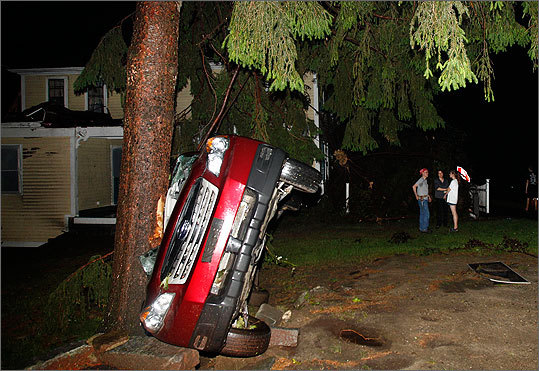 *one of my life’s aural highlights was the Boston Pop’s 1976 Bicentennial 4th of July performance of the 1812 Overture on the Boston Esplanade.** 400,000+ people, church bells throughout the Back Bay ringing and 105 mm howitzer cannons firing in sync with the orchestra, and a bicentennial-worthy fireworks exploding overhead.  Only thing missing was the thunderstorm.

**This video of the 2005 performance captures the experience reasonably well, including audience members’ clumsy, arrythmic dancing. The 1812 Overture starts at 1:50, if you want to skip the Star-Spangled Banner.

A pet peeve of mine–the only one, really, since I’m so accepting of other’s thoughts and behaviors–is blaming every extreme weather incident on global warming and related climate change.  I understand global warming enough to be confident of three things:

So I appreciated the Times’ response to this question:

Q: Can the intensity of this year’s tornadoes be blamed on climate change?

A: Probably not. Over all, the number of violent tornadoes has been declining in the United States, even as temperatures have increased, making it likely that this year’s twister outbreak is simply a remarkable and terrifying — but natural — event. Climate science has long predicted that global warming will cause more weather extremes, however, and statistics suggest that this has started to happen . . . That said, scientists are reluctant to attribute any specific weather event to global warming. And, at least so far, only a handful of studies have suggested that tornadoes are likely to become more frequent or more intense on a warming planet. Frustratingly, it is likely to be a year or two before we get good published analyses of the causes for this season’s strange weather — and it may be decades before science can conclusively demonstrate whether or not human-driven warming is affecting tornado frequency.

This is part of a continuing series titled “It’s a Handy Explanation, But It’s Wrong.”